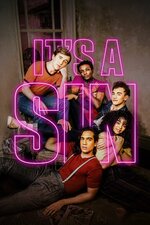 Created by 'Years and Years' creator and former 'Doctor Who' showrunner Russell T Davies, 'It's a Sin' follows the lives of three young gay men in 1981 as they begin new lives in London, just as the AIDS crisis is starting to unfold. Loosely inspired by Davies' own experiences, the young men each display different attitudes to the rumours of a deadly virus, while navigating their lives amidst mainstream homophobia and scaremongering.