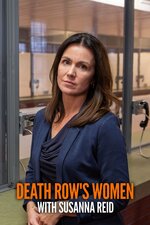 Susanna Reid travels to Texas, home of the most active death chamber in the United States, to meet death row inmate Darlie Routier, who denies murdering her two young sons. For 23 years, Dallas housewife and former cheerleader Darlie has claimed she had no part in the murders of both sons, who were stabbed to death just a few feet away from where she was sleeping. Darlie was convicted and sentenced to death by lethal injection for killing one of her sons.