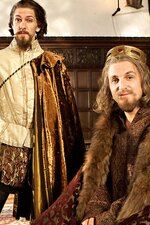 Emperor Napoleon plays in a very unusual chess match, a Victorian inventor builds an anti-seasickness ship with one small design flaw, a snowball fight breaks out at a public execution, and the British army hires a dead tramp to defeat the Germans in WW2.