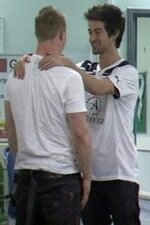 Construction worker William has been trapped under a cherry picker, breaking his leg in three places and crushing his chest. Nick has fallen from a ten-metre ladder onto concrete, landing on his head, resulting in a severe brain injury. It's a matter of life and death and his brother, Nigel, waits nervously at his bedside. Darren has fallen through a window while trying to clean it, cutting his arm badly.