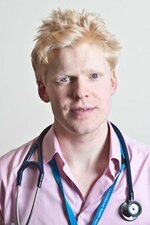 Scaffolder Thomas has been struck on the back of the head by a six-metre pole at a building site in South London. He lost consciousness and was convulsing at the scene. Meanwhile, Hilton has diabetes and is worried about his swollen legs, and retired architect Edgar comes in after suffering an asthma attack.