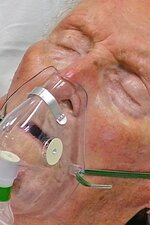 Niki, who's 34, is airlifted to St George's after crashing into another rider during a charity bike ride. Race volunteers found him unconscious and unresponsive. It becomes obvious that Niki's memory has been affected by the impact.