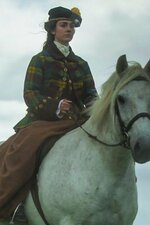 Blood of the Clans

When Bonnie Prince Charlie arrives in Scotland to regain the crown of his ancestors the clans are called upon to rise in armed revolt for him. Many do, and they invade England. But others oppose him and join the British to fight against the rebels.