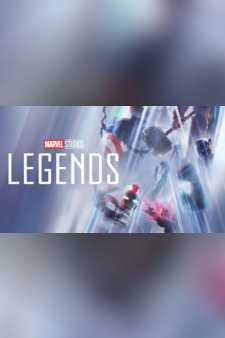 First seen brandishing his trusty bow in “Thor,” this agent of S.H.I.E.L.D. made it clear why he bore the code name, HAWKEYE. Clint Barton, the man behind the moniker, would return in “The Avengers,” and for a brief period fall under the evil influence of none other than Thor’s adopted brother, Loki. LEGENDS recounts how Hawkeye graduated to becoming a full-fledged member of The Avengers and employed his unique skillset to help defeat the megalomaniacal plans of the Chitauri, and then Ultron. We discover the somewhat surprising truth that Barton is in actuality a dedicated family man -- a fact that would eventually transform him into a deadly vigilante after his wife and children were erased from existence by Thanos. We also witness how in “Captain America: Civil War,” Hawkeye was forced to battle his dear friend Natasha Romanoff, aka Black Widow, only to later mourn her death after the tragic events of “Avengers: Endgame.”