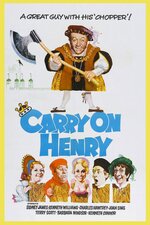 Carry on Henry is now available to stream and watch online:

Henry VIII is up in arms about the garlic breath of his wife, Marie de Normandy, but although he finds it a turn-off, his equerry, Sir Roger de Loggerley, is enamoured by it and becomes her lover. The lecherous king, meanwhile, decides it is time for a new wife and plots with Thomas Cromwell and Cardinal Wolsey to get rid of Marie.