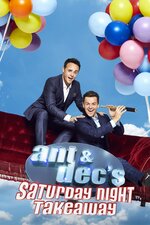 Popular comedy duo Anthony McPartlin and Declan Donnelly - better known collectively as Ant and Dec - are the presenters of this hybrid comedy-game show. The programme features a number of large-scale stunts and comedy sketches, in addition to pranks and practical jokes that are performed on members of the studio audience, home viewers and, occasionally, celebrities. One regular segment allows a chosen member of the audience to answer trivia questions in an attempt to win prizes from companies that advertise during the show's commercial breaks.