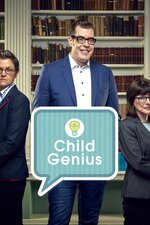 This documentary series takes viewers into the lives of some of Britain's brightest children and their families, revealing different approaches to parenting a child whose intelligence is off the scale. Twenty-one gifted children between the ages of eight and 12 were selected to participate in a competition run by British Mensa in an attempt to find the UK's top child genius. Throughout the competition, which tests the youngsters' knowledge of subjects ranging from maths to spelling, the children's progress is charted. Five children leave the competition following each round until only one remains and is crowned the Child Genius of the Year.