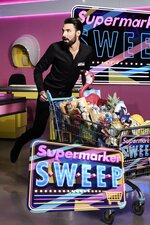 In a reboot of the iconic 90s game show, hosted by reality TV star turned presenter Rylan Clark-Neal, three pairs of shoppers compete in the ultimate supermarket challenge win a cash prize. The game starts with a question round, where each team has a clock that starts with 60 seconds on it. The team attempt to add as much time as possible to the clock by answering questions and riddles posed by the host. The more time they accumulate, the longer they can run around the supermarket filling up their trolleys. The team with the trolley with items of the highest value wins the chance to enter the final `Super Sweep' prize round. The new incarnation of show also features some new games and challenges that reflect the 21st century shopping habits.