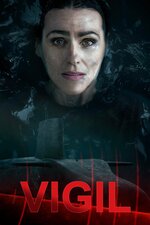 Vigil is now available to stream and watch online:

A police investigation collides with the security services and the Royal Navy in this atmospheric six-part mystery from the makers of `Line of Duty', in which a fishing trawler's inexplicable disappearance leads investigators below the waves into a shadowy world of intrigue. A suspicious death on board a high-security nuclear submarine raises the stakes, and Suranne Jones, Rose Leslie and Gary Lewis star as the police investigators fighting to continue their work against claims that they are out of their depth.