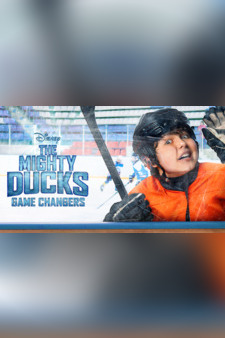 Find out where to watch The Mighty Ducks: Game Changers tonight at the UK TV Listings Guide

Where can I watch The Mighty Ducks: Game Changers in the UK?

In the UK, you can stream and watch The Mighty Ducks: Game Changers on Disney Plus UK. Please note, Disney Plus UK is a Subscription streaming service and you may need to register or provide your existing Disney Plus UK login to watch.

The Mighty Ducks: Game Changers tells a new story about the world of youth sports today. Crazy pressure from parents, kids specializing too early and being told that if they’re not on track to go pro by age 12, DON’T BOTHER. In present day Minnesota, the Mighty Ducks have evolved from scrappy underdogs to an ultra-competitive, powerhouse youth hockey team. After 12-year-old Evan Morrow is unceremoniously cut by the Ducks — a team he’s played for practically his whole life — he’s heartbroken. His mom, Alex Morrow (Lauren Graham), has had enough. She’s been lugging Evan’s hockey equipment, driving him to practices at dawn — and now he’s being told “don’t bother” playing? She just snaps — getting in the coach’s face with the big question of the series: "Shouldn’t kids be allowed to play a sport for fun?” Alex convinces Evan that they should start their own team, a whole group of “Don’t Bothers”: the underdogs, the misfits, kids who are too small or slow or just don’t buy into this modern sports culture. They’ll play for the love of the game.