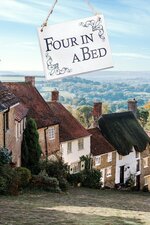 Four in a Bed

It's the third day of the week's competition and the turn of Stephen to host at the four-star Old Hall House. Stephen hasn't opened up to the group yet, much to the chagrin of some of the other guests, who seem to have taken a dislike to him.