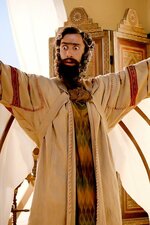 Mankind's most ingenious inventors are given the `Horrible Histories' treatment, as we take in everything from the invention of the wheel to the crisp. Featuring the Gutenberg press, the man who invented both the dictionary and manned flight. Also the Greeks and the Chinese battle as to which of them are history's best inventors.