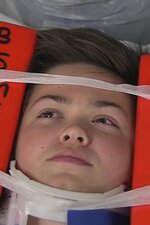 Thirteen-year-old Will arrives by helicopter after colliding with someone during a game of baseball. He lost consciousness at the scene and medics are worried that he may have sustained serious internal head injuries. Meanwhile, in the paediatric area of A&E, teenage parents Connor and Saffron have arrived with their six-month-old daughter Amira after their GP spotted an irregular heartbeat during a routine check-up.