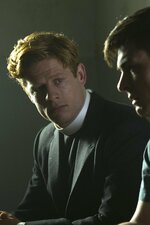 As the trial of local teen Gary Bell approaches, Sidney and Geordie find themselves at loggerheads regarding his guilt. Sidney is asked by Reggie Lawson to perform an exorcism at his home and stable yards, convinced that the spirit of his dead wife Anna haunts the place. Believing this to be a husband's desperate grief, Sidney hopes his words have given Reggie some solace. That night, Geordie summons Sidney back - Reggie has hanged himself in the same spot as Anna.