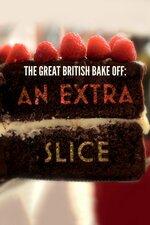 The Great British Bake Off: An Extra Slice

Jo Brand is joined in studio Mary Berry to get her take on the nerve-wracking final bakes and why she and Paul chose their eventual champion. Jo interviews the year's winner as well as the two runners-up, and she is also joined by the rest of the year's bakers.