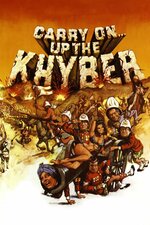 Find out where to watch Carry On ... Up the Khyber tonight at the UK Streaming Guide

Carry On ... Up the Khyber is now available to stream and watch online:

Classic `Carry On' set in India during the 1890s. Sir Sidney Ruff-Diamond is looking after the British outpost near the Khyber Pass. Protected by the kilted Third Foot and Mouth regiment, you'd think they were safe, but the Khasi of Kalabar has other ideas.