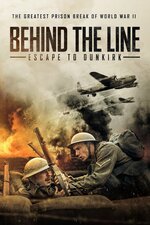 Behind the Line: Escape to Dunkirk

Add to my Watchlist
Find out where to stream and watch Behind the Line: Escape to Dunkirk at the UK Streaming Guide

Captured by the Nazis in the Ardennes forest, Danny must prepare for the fight of his life when he is forced into a boxing match against a formidable Nazi opponent. Danny's success or failure means life or death for his fellow prisoners and himself.