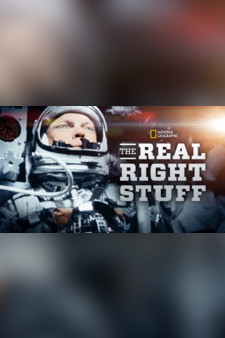 Where can I watch The Real Right Stuff in the UK?

In the UK, you can stream and watch The Real Right Stuff on Disney Plus UK. Please note, Disney Plus UK is a Subscription streaming service and you may need to register or provide your existing Disney Plus UK login to watch.

In 1961, NASA successfully sent its first astronaut into space, restoring the world’s faith in the US space program. Now, nearly six decades later, the human spirit for exploration remains as fervent as ever. The Real Right Stuff traces back to the very beginning, as the nation’s first astronauts – famously known as the Original Mercury 7 – become overnight heroes during the high-stakes era of the space race. A companion piece to Disney+ and National Geographic’s scripted series, The Right Stuff, this new documentary from Emmy and Peabody Award-winning filmmaker Tom Jennings (“Apollo: Missions to the Moon,” “Diana: In Her Own Words”) is based on Tom Wolfe’s bestselling book of the same name. Jennings uses his signature style of first-person storytelling to create a gripping account of NASA’s Project Mercury program, which revolutionized America’s role in space exploration. Told from Wolfe’s point of view and through the perspectives of the Mercury astronauts, the two-hour special catapults viewers back to the late 1950s and tells the remarkable story that inspired future generations of space enthusiasts. Free of modern-day narration and interviews, The Real Right Stuff interlaces archival news and radio reports, newly transferred and previously unheard NASA mission audio recordings, and rare and unseen material to immerse viewers in one of the most dramatic and tenacious periods in American history.