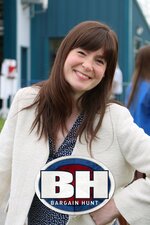 Bargain Hunt is now available to stream and watch online:

Two teams of amateur collectors meet at one of the many antiques fairs around the UK and compete to find bargains that will make the most profit at auction. They are given an hour to hunt for interesting items and a budget of three hundred pounds. Each team is guided by an antiques expert who can help the teams to select antiques and collectibles that will have the most chance of making a profit. Each team hopes they will be the lucky group who discovers a treasure trove that will take them to victory.