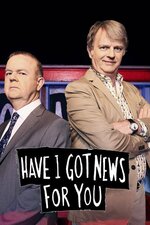 Have I Got News for You

Celebrity contestants find themselves in the hot seat as they are quizzed on the latest news. The programme consists of several rounds, including the film round, the tabloid headlines round, the odd one out round and the missing words round. Originally presented by Angus Deayton, the show has relied on guest hosts since 2002. Ian Hislop and Paul Merton serve as the team captains. `Have I Got News for You' was awarded the Lifetime Achievement Award at the 2011 British Comedy Awards, the first time that the honour has been awarded to a collective rather than an individual or double act.