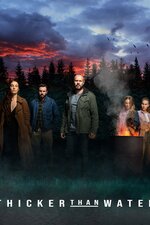 `Thicker Than Water' is a Swedish drama series following the lives of the Waldemar family. Siblings Oskar, Lasse and Jonna are reunited when their mother Anna-Lisa invites them to the family's guest house before the season's opening. But when Anna-Lisa suddenly passes away, it turns out that she had a plan to collect the siblings in an attempt to resolve their differences. But rivalry, betrayal and jealousy instead begins to tear them apart. Dark family secrets are revealed and one of them is buried near the guesthouse.