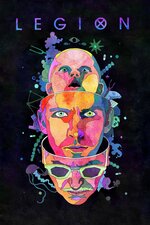 David Haller is a troubled young man who was diagnosed with schizophrenia as a child. Shuffled from one psychiatric institution to the next, in his early 30s, David met and fell in love with a beautiful and troubled fellow patient named Syd. After a startling encounter with her, he was forced to confront the shocking possibility that the voices he hears and the visions he sees may actually be real. Syd led David to Melanie Bird, a demanding but nurturing therapist who heads a team of specialists -- Ptonomy, Kerry, and Cary -- each of whom possesses a unique and extraordinary gift. Together, they helped David to recognize and harness his hidden abilities and unlock a deeply suppressed truth -- he had been haunted his entire life by a malicious parasite of unimaginable power.