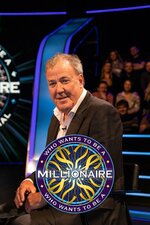 Who Wants to Be a Millionaire?

Find out where to watch Who Wants to Be a Millionaire? tonight at the UK Streaming Guide

Former `Top Gear' presenter and opinionated `The Sunday Times' and `The Sun' columnist Jeremy Clarkson presents the rebooted version of `Who Wants to Be a Millionaire?', the 12 question quiz with a £1,000,000 prize. Each contestant can use three traditional lifelines: 50-50 which removes half of the answers, Ask the Audience which polls the studio audience for their answer, and Phone a Friend, wherein the contestant can call a friend for 30 seconds to ask for their advice. However, there is now a fourth lifeline: Ask the Host, where the contestant can ask Clarkson if he knows the answer to the question, and there is also a new second `safety net', previously set at £32,000, which is now able to be set by the contestant themselves. Also, Contestants must first win their chance to play the quiz by winning the Fastest Fingers First round, competing against other potential players to be the quickest to answer a question with sequenced answers.