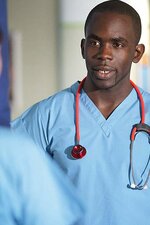 Malick tries to control his temper when a racist patient makes a formal complaint against him, and can Elizabeth stick up for herself and a patient when the old differences between Ric and Michael threaten to jeopardise their case? Elsewhere, has Greg done the wrong thing by involving Mary-Claire in a plot to encourage Sacha to move on from Chrissie?