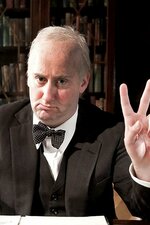 This episode follows Winston Churchill from a young soldier in India during the time of Queen Victoria, through the First World War, to victory in World War II, and finally to his retirement in the Swinging Sixties. Meanwhile across the world, meet the American soldier literally spreading propaganda around the battlefields, and learn about Gandhi's more eccentric side.