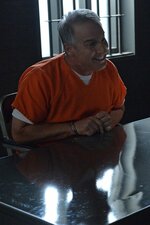 Olivia is summoned by a convicted assassin who claims he was wrongly accused, and Mellie becomes intrigued by a former first lady whose stories seem to be strikingly similar to her own.