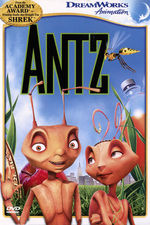 A neurotic ant struggles to express his individuality in a colony of conformists. He attempts to break from his totalitarian society while at the same time trying to win the affection of the princess he loves. A DreamWorks animation.