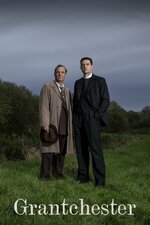 Grantchester is now available to stream and watch online:

In the Cambridgeshire village of Grantchester in the 1950s, gruff, down-to-earth police inspector Geordie Keating's methodical approach to police work complements the intuitive techniques of the local vicar Sidney Chambers, and later Reverend Will Davenport. Geordie forms an unlikely partnership with both men of the cloth, and as partners they bring different insights into the crimes they start to unravel, forming true friendships as they work together. Village life in Grantchester proves to be much livelier than its sleepy appearance might suggest, with intrigue and gossip swirling in the background of Geordie's investigations.