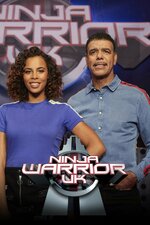 Hosted by Ben Shephard, Rochelle Humes and Chris Kamara, this British version of the Japanese obstacle course show `Sasuka' sees 250 competitors from across the country take on the first stage, consisting of six different obstacles. From the five qualifying rounds, the ten contestants who make it the furthest the fastest in each round advance on to the semi-finals, which involves nine obstacles. From there, only the top ten semi-finalists will advance onto the final, which is split up into four different parts. The contestant who advances the furthest is then crowned as Ninja Warrior for the UK.